What it's like to be a teen in L.A. with a parent in the U.S. illegally | Los Angeles Times

It was hard not to eavesdrop in the tiny Pico-Union studio where Maria Garcia grew up.

She was around 9 when her father came home one day from his low-wage job as a garment worker and told her mother about the immigration raid at his downtown L.A. factory.

She could hear their relief that her father hadn’t been found.

The Board of Supervisors took steps Tuesday to ensure Boyle Heights residents have a voice in shaping development around LAC+USC Medical Center.

Supervisor Hilda Solis recommended hiring a consultant to facilitate a partnership between the county, USC and local residents, hoping to generate a shared vision for the campus and community.

“It is important we make sure everyone gets a seat at the table,” Solis said.

Residents and community advocates told the board that they’ve been excluded from conversations about development of the campus for too long. 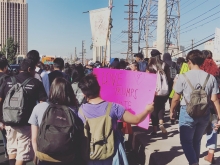 On the morning of Monday November 14th, nearly 4,000 students from 18 LAUSD schools, including all seven of the local Eastside high schools: Roosevelt, Garfield, Mendez, Torres, Solis, Wilson and Lincoln walked out of their campuses in protest to the presidential election outcome and to raise their voices in support of their families and communities. 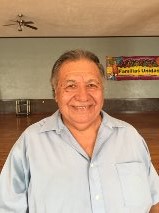 Indeed, community schools are guided by a philosophy that schools and neighborhoods work together to offer services identified by students and parents as crucial, said speakers at InnerCity Struggle’s Eastside Community Schools Convening on Aug. 27 at Felicitas and Gonzalo Mendez High School. For the Ruiz family, that would mean adding more specialized services to students with special needs in the schools.

Ruiz’s son was diagnosed with autism when he entered kindergarten. The younger Ruiz walked on his tippy toes and could barely talk. 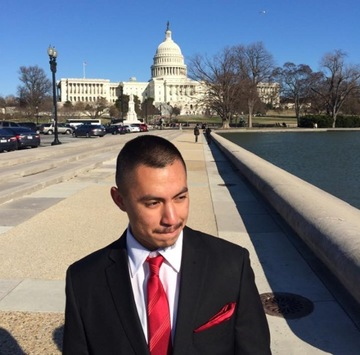 Most high school students usually spend their lunch time hanging out with friends.

For Eduardo Pacheco, it was a different story.

Instead, the recent high school graduate spent his lunch – and even breaks during classes – rummaging for cans and plastic bottles that he could recycle. Every little bit of money he earned helped his family, who had a difficult time making ends meet after his father couldn’t find a construction job during the recession.

The event will bring together key allies and stakeholders, as well as organizational and community leaders to discuss the importance of community schools.

InnerCity Struggle opposes the proposed 710 freeway tunnel that would run from El Sereno to Pasadena because it would not reduce traffic in the area and would worsen air quality for thousands of residents.

The proposed tunnel would start where the 710 northbound freeway lanes end at Valley Boulevard in Alhambra. It would pass underneath hundreds of El Sereno homes and disproportionately impact the neighborhood that includes El Sereno Arroyo Playground where many children play daily. Bringing more traffic to an area where children live would put them at an increased risk for such health problems as asthma and cancer.

I Love the Eastside Campaign

InnerCity Struggle (ICS) is launching the I Love the Eastside campaign to celebrate the organization’s 20th anniversary. For 20 years, ICS has built a powerful and influential movement of youth and families on the Eastside of Los Angeles to promote healthy, safe and nonviolent communities. The Eastside is comprised of the communities of Boyle Heights, unincorporated East Los Angeles, El Sereno and Lincoln Heights.

After months of organizing, Eastside students and parents celebrate the Los Angeles School Board’s approval of the Equity is Justice Resolution in a 5:1 vote ensuring $837 million are allocated to the district’s highest need schools. The Resolution directs the Superintendent to use the Aggregate Student Need Index developed by the Advancement Project, in collaboration with InnerCity Struggle and Community Coalition as a foundation for distributing Local Control Funding Formula (LCFF) dollars. The Student Need Index will use a rigorous and research-based set of variables including demographic, academic, health and neighborhood metrics to rank LAUSD schools according to an aggregate need for LCFF funds distribution.

As the end of the school year and summer vacation approaches, some high school students are starting to plan what to do during their free time.

In East Los Angeles, members of United Students, a program of the education-based nonprofit InnerCity Struggle, are preparing to attend the Media Justice Academy in July.