California, L.A. Agree: Locking Up Young Children is ‘Nothing Good for Nobody | The Chronicle of Social Change: 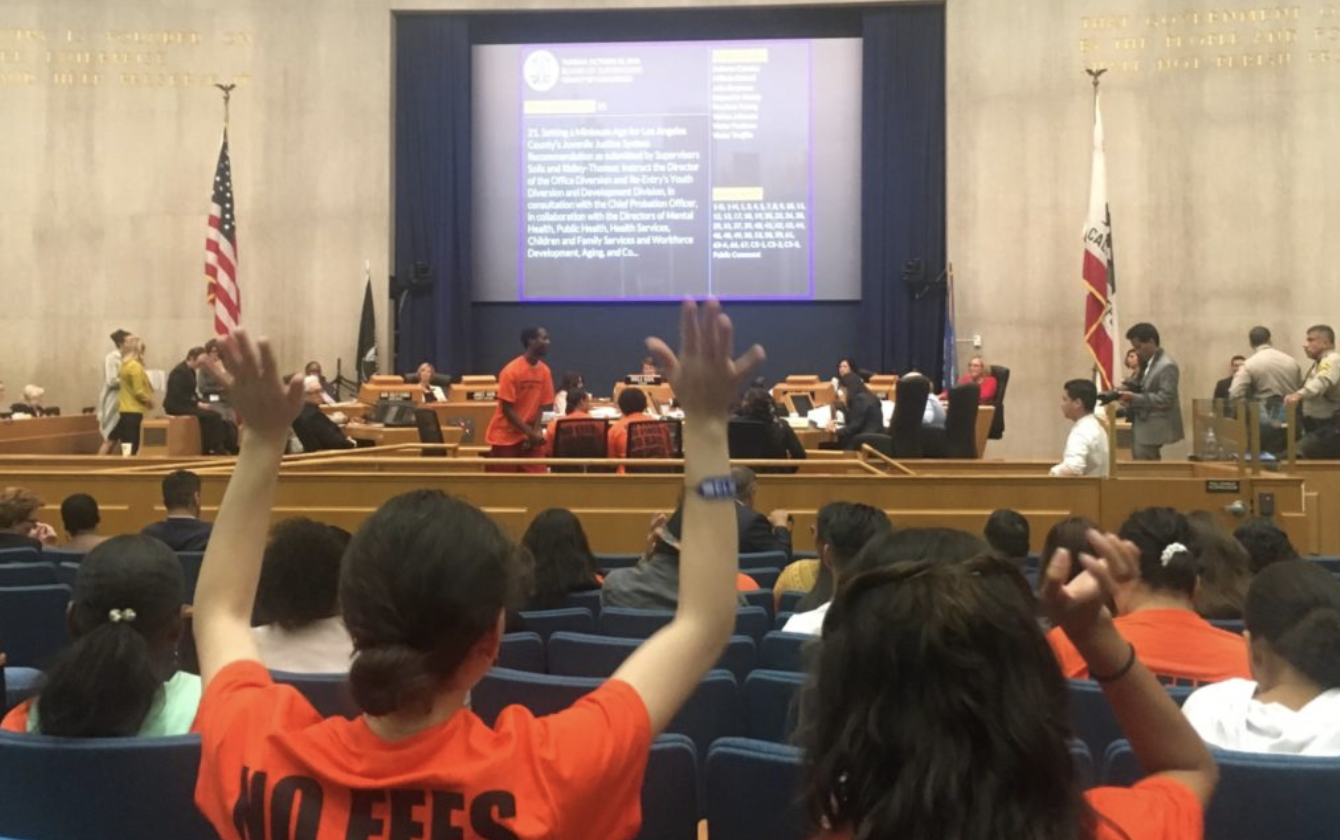 After the passage last month of a California law that will bar children 11 and younger from juvenile prosecution, Los Angeles County leaders want to go even further to decriminalize youth.

At a meeting Tuesday, the County Board of Supervisors asked key public agencies to come up with a plan on how to implement the new law through its new youth diversion initiative and assess the possibility of banning many 12- and 13-year-old youths from being prosecuted in juvenile delinquency court.

The move from the state’s largest county adds momentum to California’s already progressive stance toward children and youth involved with the justice system. Senate Bill 439, signed by Gov. Jerry Brown(D) in September, directs the state’s 58 counties to come up with plans about how to serve children ages 11 and younger outside of the juvenile justice system. Children who are facing serious charges like murder or rape will still be sent to juvenile court.

The law puts California on equal footing with Massachusetts in its prohibition of criminal prosecution of children under 12. No other state has a higher minimum age for juvenile court involvement.

“Because we did not have a minimum age, we in Los Angeles County had two 7 year olds and two 8 year olds arrested last year,” said Supervisor Hilda Solis at the meeting on Tuesday. “You have to ask yourself: How can that happen?”

State Sen. Holly Mitchell (D), one of the co-sponsors of SB 439, said she applauded L.A. County’s effort to raise the age of juvenile justice system involvement in light of ample evidence showing that detention and incarceration harms young people.

“Children are not pint-sized adults,” Mitchell said. “Children who find themselves in the juvenile justice system have been failed by us and have been failed by some publicly funded system, either the child welfare services system — we failed to protect them — or an education system that has failed them.”

With SB 439 going into effect in January 2019, L.A. County wants to make sure that it has a plan in place to serve children outside of the delinquency court. It is also hoping to tie those efforts into the county’s youth diversion and development initiative, which was passed by the board last year.

According to the board motion, “counsel and release” will be the default action in most cases where L.A. County children are arrested, which means that children would be released to their parents instead of sent to court.

For children who exhibit more serious issues at the time of arrest, they would receive a “graduated response” from the county that could include voluntary services from the mental health or child welfare systems, among others.

According to the motion, involvement with the county’s dependency court system should be looked at as “a last resort.”

The county Office of Diversion and Reentry’s new Youth Diversion and Development division will be responsible for creating a plan about which county agencies or community organizations will assume responsibility for providing services to these children.

It will not be a large number. According to recent research of California crime data, there were 687 cases where children younger than 12 were referred to the juvenile justice system. Just 59 of those cases — 9 percent — were adjudicated, with most filed as misdemeanors.

L.A. County would like to see if it might be possible to go even further than children under the age of 12. “Last year, there were just over 100 12-year olds and just over 350 13 year-olds arrested in the county,” according to the motion.

That idea drew an enthusiastic response from many advocates gathered at the Board of Supervisors meeting on Tuesday.

“L.A. County can lead the state of California further to ensure that children aren’t impacted negatively impacted by the effects of arrest and incarceration on youth,” said Maria Brenes, executive director of the Boyle Heights-based nonprofit Inner City Struggle. “The impact of system involvement are dismal for our children. Youth are 39 percentage points less likely to finish public school than their peers after experiencing incarceration or detention.”

Being locked up in juvenile hall is especially hard on children, according to Demonte Wells of the Youth Justice Coalition.

“I’ve been going to juvenile hall since like [I was] 10 or 12,” said Wells, who is now 17. “It’s nothing good for nobody … You aren’t able to get to see your family every night at a young age. Not getting to speak with your family, that really brings tension and chemistry between your family … that’s a really important thing.”